Gemma contacted me and asked about a friend, Robbie.

Her unexpressed concern is about the friendship. She’s undecided about it and trying to make a decision which she finds difficult. [Moon in 11th, in Gemini in peregrine]

She’s lost and is in distress over her friend. Some had happened about 6 weeks ago, around 14 January 2014 or 6 days ago i.e. around 19 Feb 2014) between Gemma and Robbie. Robbie is the one who approached Gemma. Whatever had happened is private, unknown to others and involves fun, sex or children. I image that Gemma didn’t respond too favourably to Robbie’s advance or approach. [Sun in peregrine in 8th, Mercury applied to Sun about 6° ago. Mercury is the faster planet of them two. Sun didn’t receive Mercury with any reception].

Robbie’s communication isn’t direct, straight-forward. In fact, his words may not be what they seem to mean. It’s hard to know for sure as the words and/or him can be deceptive. [Mercury conjunct Neptune]

There’s going to be a radical change in the friendship in about 2 days (26 Feb) or 2 weeks time. Maybe some distancing and cooling off. [Moon applies to Uranus by sextile in about 2°]

Gemma mentioned that there’s another woman involved. I see Robbie approaching that woman in either 5 weeks from 24 Feb or 5 days (29 Feb 2018) or on 4 March 2018. That woman is very likely to respond favourably to his approach. Fun, sex or children may be involved [Mercury conjunct Venus in about 5°. Venus squares Mars on 5th].

There’s a possibility that Robbie approaches Gemma again, starting from 23 March to 14 April 2018, especially on 1 April 2018. I suspect Gemma is likely respond favourably to Robbie then. However, I wouldn’t know of Robbie’s intentions then if that indeed happens. [Mercury retrograde and conjunct with Sun] 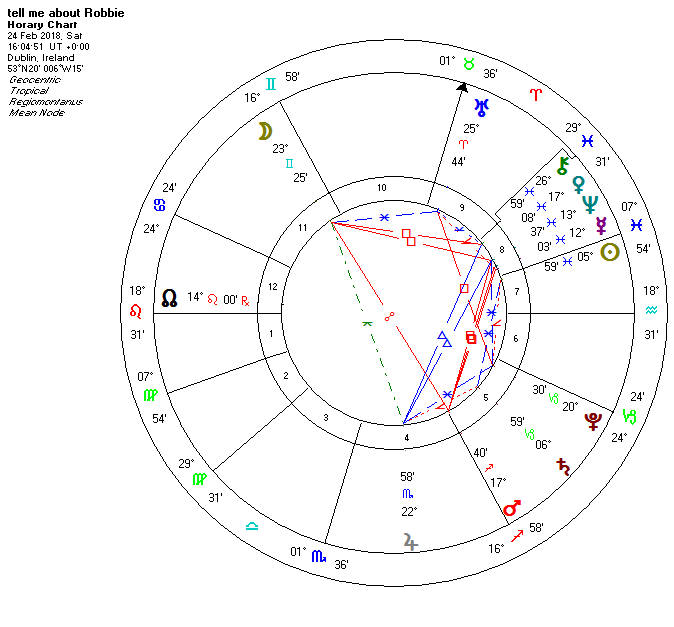 Will This New Relationship Last?

Horary: Will I Have a Musical Career?

Will We Get Married?