A woman asked whether a man he met will leave his wife for her.

Chiron sits directly on the Ascendant yelling at us. The woman feels hurts and abandoned. The source of the wound relates to being overseas at work (Chiron is disposed by Mars in 9th which is in turned disposed by Sun in 10th). Or there could be an argument with her husband (Mars in turned 3rd). Children, fun, sex and work are part of the mix.

Venus and Mars – no applying aspect from Venus to mars.

Moon and Venus – Moon is applying a sextile to Venus. Venus receives it in its face. This is a very weak reception although it’s better than nothing. But the effect is like a square – both can be together after overcoming lots of challenges and investing loads of effort. Interestingly, the Moon’s last separated from Saturn in 6th and translated the light from Saturn to Venus. In fact, the Moon is besieged! (in the modern use of the terminology). Stress and difficulty surround the question.

Does the man have the power to leave his wife? Venus represents the man. It is under the sunbeams which weakens it even though it’s angular. It is in its fall. It can’t express its basic loving nature effectively. It is disposed by Mercury which is presumably the wife as Mercury and Venus are next to each other. Mercury is in its sign. Strong and angular and rules the turned 4th and turned 2nd. The wife controls the home, family and the husband’s finances and the husband. The husband is at home (Venus in turned 4th). Venus rules turned 5th and 6th. The man is concerned with his children and work.

It’s unlikely that the man will leave his wife for the querent. 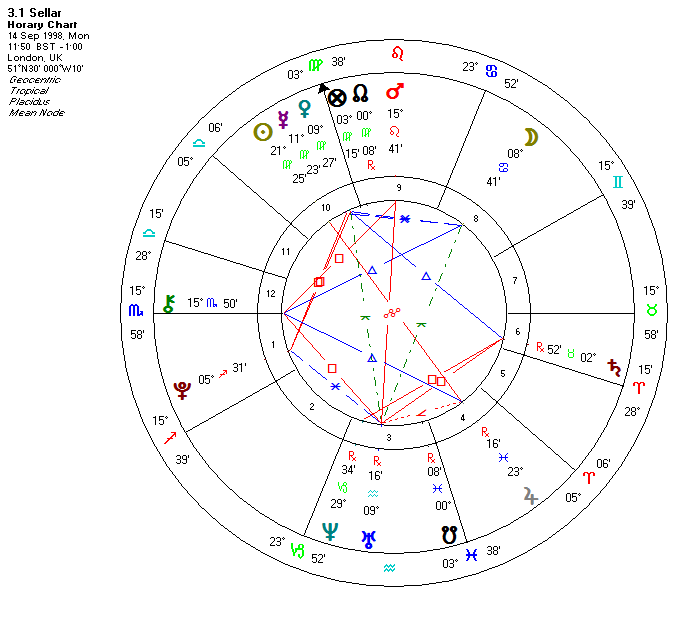 Horary: Will I Get the Job?

Will This New Relationship Last?